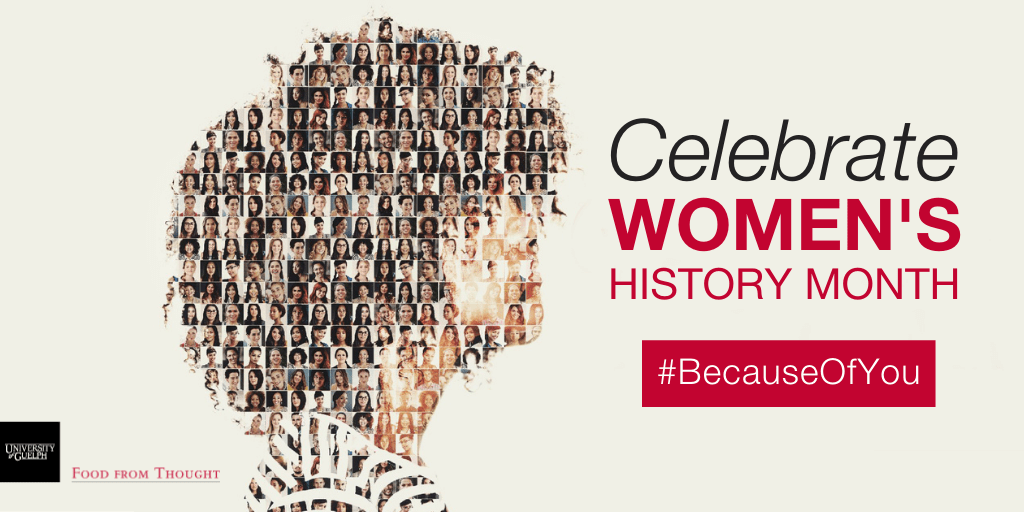 Many women have made extraordinary contributions to science, culture, and the liberation movement throughout Canadian history. October is Women’s History Month, and this year’s theme, #BecauseOfYou, celebrates women and girls in Canada who have made, and continue to make, a lasting impact on our country.

In recognition of this important event, we asked Food from Thought’s researchers to tell us what Women’s History Month means to them and to share their thoughts on women who have inspired their work and continued research.

Madhur Anand, a Professor in Environmental Sciences conducting work on crop research, celebrates the impact of an important woman. The recent release of her book, This Red Line Goes Straight to Your Heart, takes a 75‐year historical perspective on her mother’s life.

“She inspired many things that I value: honesty, excellence, plants, and yes, good food,” says Madhur.

You can learn more about her book at the Toronto International Festival of Authors on October 27th. Details can be found here.

Evan Fraser, Director of the Arrell Food Institute and Scientific Director of Food from Thought, took the opportunity to celebrate the continued work of Lynda Kuhn, Senior Vice President of Maple Leaf Foods.

The Centre for Action on Food Security is a non-profit organization that strives to create social value by addressing food insecurity. Their mandate is to reduce food insecurity in Canada by 50 per cent by 2030.

Additionally, Lynda developed and has continued to lead the company’s comprehensive mission to embed sustainability into the culture and business practices.

“[She] spent her early career leading the formation and execution of development strategies at the regional and community level, including eight years working with First Nations Mi’kmaq communities in Atlantic Canada. In this capacity, she worked closely with indigenous leaders to advance bilingual-bicultural education, housing, health, and economic development initiatives,” says Evan.

Lynda is also the co-founder of Nyota, a home for orphaned children in Kenya, and has worked with local educators within the community to establish an education foundation that provides scholarships and personal development for impoverished students.

Graham Taylor, a researcher in the School of Engineering, is inspired by the work of Joelle Pineau for her efforts promoting reproducible research in Machine Learning.

Joelle, a Computer Scientist and University of McGill faculty, is the lead of Facebook’s Artificial Intelligence research lab in Montreal.

“Her creative outputs, such as the ‘Machine Learning Reproducibility Checklist’ and the ‘Reproducibility Challenge’ have been instrumental in changing machine learning researchers’ practices for the better,” says Graham.

“Her talks and writings have been fodder for my own group’s discussions on the subject, and are an important part of our graduate student development.”

Food from Thought is pleased to recognize and celebrate the lives, work, and contributions of these impressive women.